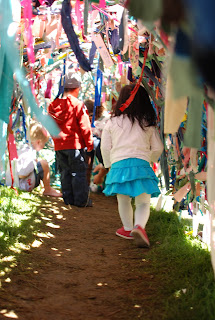 We attended the children’s festival this past Sunday, and it was absolutely fantastic!  There were a lot of simple, yet very creative activities that yielded some beautiful creations.  We didn’t get a chance this year to check out the ticketed shows because my daughter wasn’t old enough yet, but we will definitely next year.

We spent most of our time in the exploration zone, where they had a number of tents with exploratory and creative art activities.  The entry of this zone greeted you with two serpents made out of recycled materials.  Children were asked to make a drawing on solid paint chips, which then each child had to tie their small piece of art to the body of the serpent – weaving a large piece of art which everyone can appreciate. These are the types of installations I would like to conduct in the future – a large, collective piece of community art that evolves over a fixed time period. Running through the belly of the serpent was a colourful experience.  This is the image on the left.  See full photo coverage of the event on our Flickr site – Children’s Festival Photo set. 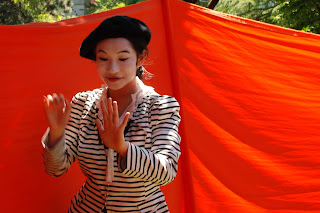 The Magical Mystery Maze included young performers dressed as a princess, mime, magician, mimic, and more. As children raced through the multi-coloured maze made of fabric, you encountered some interactive theatre. I think we went through several times.  There’s something that children love about racing through coloured tunnels, and parents are happy to let their children run through a “protected” area. 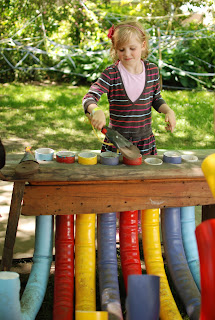 The outdoor music area was constructed of some custom made instruments – some never seen before until the festival.  There were xylophones made out of pipes painted with the colours of a rainbow.  The stands were made out of old bicycle wheels.  There was another instrument made of PVC pipes, curved and of varying lengths.  You drum the ends, and the way it sweeps the air into the pipe, it creates a woomp sound. They also had a piano without the keys!  Basically, it was an upright piano chopped in half exposing the strings inside.  Normally, the piano keys when hit, would have a second set of keys that hit the string creating a vibration that gives off a certain pitch of sound – I guess that is why it is under the “percussion” category. Children were invited to use guitar picks to play each string.  The piano has been turned into a string instrument! Another tent consisted of African beats, where children were invited to form a spontaneous drum circle. 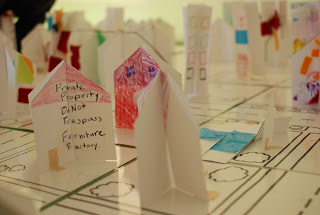 Back to crafts, an activity which caught the attention of my daughter was the “Me on the Map” interactive lab.  Kids were give a choice of decorating either a residential tower or pitched roof house.  My daughter chose the high-rise condo!  She is a city girl of course, and recognizes condos more than houses.  Once the child selects a building, they are invited to a craft table, where they can draw and glue scraps onto the building.  When they complete their building, they have to place it on a city grid on the floor.  This created a city mosaic – customized homes with their own personalities. After placing their building, each child is asked to pin their current home location on a hand drawn map of the Lower Mainland. The Round House Community Centre is offering a summer daycamp in August that is similar to this.  It is an interactive multi-media theatre project about city living and civic responsibility reflecting children’s experiences and art. More info at www.neworldtheatre.com.

Next up was the large tent of busker tricks.  There were hoola hoop sessions, lessons on juggling, balancing a yoyo with two sticks, and walking on stilts.  Every child was encouraged to try some of the tricks.  Some kids were already masters!

The water park next to the community centre was open.  We spent nearly an hour here playing with the water.  This is one of the best water parks in the city.  It has a mixture of water play appropriate for all ages.  Small water hoses for toddlers.  Fountains, and walls of showering sprays.  The water slide was a hit for older kids, some including adults that were “assisting” their children. 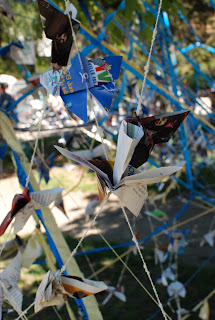 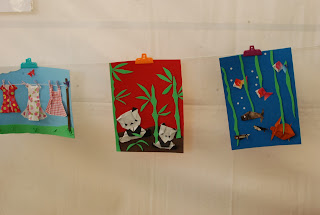 The master paper craft of them all was the origami tent.  Next to it was a web of butterflies made of reused Children’s Festival pamphlets.  Inside the tent, they were teaching children how to fold different animals and objects, and even how to compose a complete scene made out of origami.  The practice of origami takes a lot of patience, discipline, and precision.  Each fold has to be precise, and follow a set of instructions.  The results are of perfection, and the kinds of things you can fold are boundless.  We can create an entire world out of origami! Okay, this may echo some of my own obsessions with origami, but it is amazing … 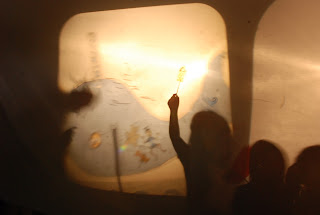 The next tent that was a major hit among kids was the sock puppet tent (with over 20 minute wait time, so we didn’t get a chance to go inside and make one). I think the most popular activity of them all was the shadow puppet tent.  The parents and children had great time participating and watching this live puppet show.  So much you can create with an old school projector and coloured transparencies. There were ready made props with a variety of animals on sticks, clouds for changing weather, planets and space ships for aliens from outer space. With carnival type music in the back ground, the children took turns putting animals on the projector back stage, while parents and friends enjoyed the scene of interactive play projected onto a white sheet in the foreground. 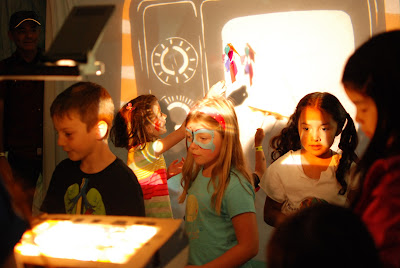 The last tent stop was the “pre-school” activities tent.  There were a series of mini-tents connected by tunnels.  More things for my daughter to crawl through! She loves exploring.  They also had an area for dress-up, which included silly hats, sparkly purses, dresses, and other costumes.  The most popular activity was the small water obstacle, where the children could move toy cars, boats, and other objects along water pathways. There were a few tug a wars over some fancy cars and water pumps.  Kids still need to learn how to share! My daughter, especially. 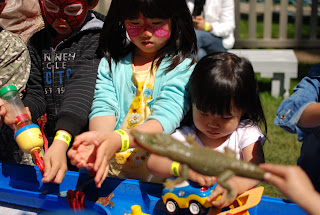 It was the perfect way to spend a sunny Sunday – at the last day of the festival where the entire Lower Mainland’s children attended.  It was busy and bustling, but that made it more lively and fun.

Michelle is a dedicated and passionate individual, who is extremely creative and wishes to share her talents with the world. She is a professional photographer, and an experienced Architectural Designer. She specializes in Family, Events, and Editorial photography.

Had a fun time photographing a Bollywood sensation!