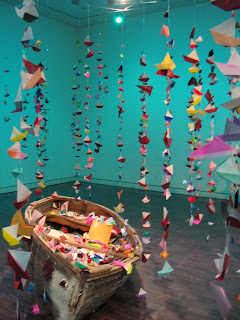 I have a box full of origami animals and objects that my daughter had requested me to fold for her.  I saw an exhibit at the Asian Art Museum in San Francisco back in July 2003. There was a room filled with a sea of origami boats.  The turquoise wall blended the colours of the boats into a beautiful oceanic dream. I am inspired to fill my daughter’s room with strings of origami, and paint it with a similar colour of light.  This will save me the time to paint the walls with real paint. I will post some photos in this post as an update when I complete this project for my daughter’s room.

My obsession with origami started when I was a young child, about the same age as my daughter is now.  My grandmother use to fold boats and paper cranes for me.  We would also fold paper air planes and see how far they would fly down the hill from our house.  When I met a friend that was from Hong Kong, she taught me how to fold good luck stars.  She said that if I folded them as I made my wish, it will eventually come true.  Also if I folded jars of them and gave them to someone I cared about, it would give them good luck. I was very patient and probably folded a couple hundred of these.  I managed to fill a pyramid that use to contain Ferrero Roche chocolates (which my parents still have in their home), and a couple of jars that I gave away.  I wanted my dreams to come true, and also to help others in someway. When I heard the story of  “Sadako and the Thousand Paper Cranes” in grade school, I was so inspired, I wanted to fold a thousand cranes to save a life, any life.  I would do that now as part of a fundraiser.  When strung together, the cranes form a wreath or form like a leigh of flowers – a peaceful offering to greet others or the divine.  As part of our first public workshop, I will organize a get together to rally a community of people to fold and fundraise for a cause – one of healing or world peace.

How to fold a crane

“Sadako and the Thousand Paper Cranes“

I have recently read this book written by Eleanor Coerr. She is a Canadian-born Author.  When she was visiting Japan, she encountered a statue dedicated to Sadako.  She wrote this book and shared this true story with the world.  It since has been published in many languages.  This story is about a girl who died of Leukemia from the radiation resulting from the Atomic Bomb that the US dropped on Japan.  In her last weeks, she attempted to fold a thousand cranes, so that the Gods would grant her a second chance at life.  She didn’t make it, but her story has affected the world.  Her story continues to be told in classrooms as part of peace education.

Michelle Yeung Photography is an on-location photography service. I am a dedicated and passionate individual, who is extremely creative and wishes to share my talents with the world. I am a professional photographer, and an experienced Architectural Designer since 2005. I specialize in Family, Events, and Editorial photography.

To see most current Photography see my Instagram page at: